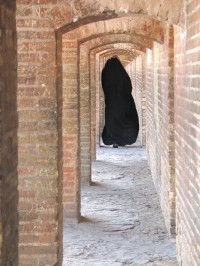 This is probably the most famous of Isfahan’s bridges. It is made up of a series of 33 arches and was commissioned in 1602 by Shah Abbas I from one of his Generals. The name – Si-o-Seh Pol is derived from the Farsi for 33 (Si-o-Seh). The bridge is built on a series of pontoons of great width and there is a famous tea-house amongst them which is accessible from the southern bank.
The bridge was originally known as the Bridge of Allahverdi Khan who was the general responsible for its construction. The lower level of 33 arches is surmounted by a second layer, with one arch above each of the pontoons and two arches above the lower single arch, giving it its name and rhythmic appearance. The road along the top is sandwiched between high walls which give some shelter from the wind as well as protection for travellers who can walk along the footpaths on either side to avoid the crush of the traffic. Originally there were frescoes on the walls which Sir William Ousely, who saw them in 1823, felt to be dangerous for the morals of passers by!
The bridge itself is 295m long and 13.75m wide. The thirty four piers on which it is constructed are 3.49m thick and the arches are 5.57m wide. The southern side of the bridge, where the waters of the Zayandeh run more swiftly has supplementary arches, and it is this that makles them suitable as a tea house. The bridge acted as a springboard for the development of the Khajou Bridge some 50 years later.